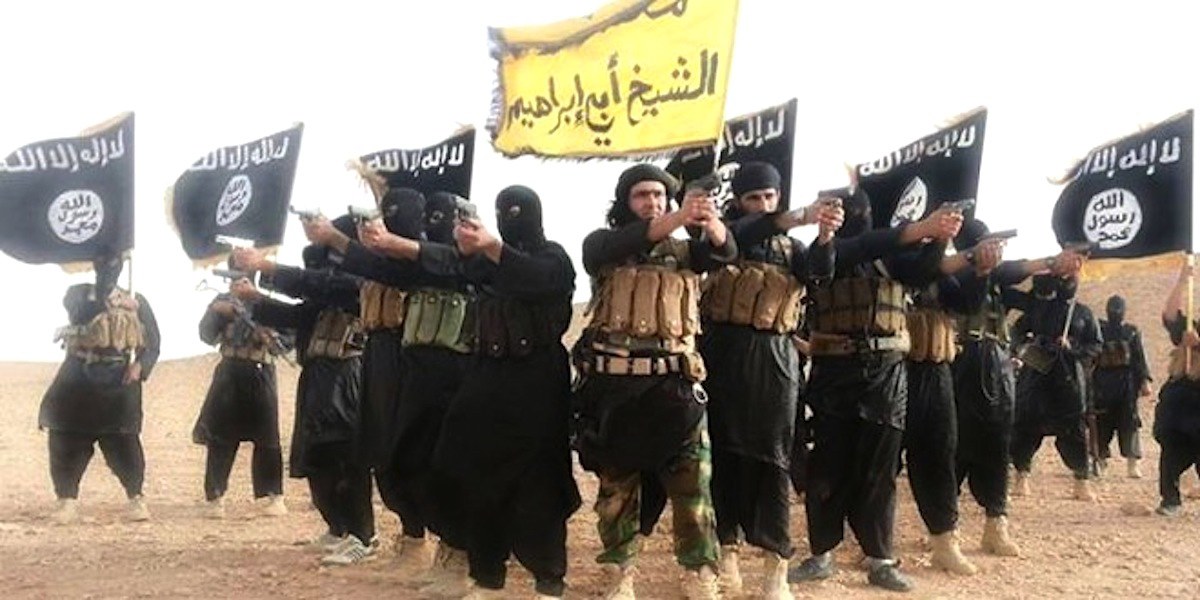 Two Japanese hostages, one demand from ISIS: Hand over $200 million, or else.

The else being that the pair will meet the same gruesome fate as other captives held by the terrorist group, others who were shown in ISIS videos kneeling in orange jumpsuits in front of masked, black-clad men — just like the Japanese hostages identified as Kenji Goto Jogo and Haruna Yukawa — shortly before being beheaded.

In the latest video, a masked man gives the Japanese government a choice to pay $200 million — the same amount of money Prime Minister Shinzo Abe recently pledged for those “contending” with ISIS — to free the Japanese men. That deal holds for 72 hours, which would seem to mean sometime Friday, since the video appeared on social media Tuesday.

Another move that theoretically could change things would be if Japan’s government halts its alliance with those fighting ISIS, which calls itself the Islamic State. Tokyo hasn’t participated in airstrikes aimed at the Islamist extremist group, though its leaders have supported those who have, as well as the Iraqi government.

“Although you are more than 8,500 kilometers away from the Islamic State, you willingly volunteered to take part in this crusade,” the masked man on the video posted Tuesday says, addressing his comments to Abe.

But Abe, who is visiting the Middle East, didn’t seem about to bargain Tuesday.

He stood by a pledge, made in a speech at the weekend in Cairo, for funding to help build “human capacities, infrastructure and so on” for those affected by ISIS’ armed campaign.

“The pledge aid is very important to the refugees in need and has nothing to do with the Islamic communities or the radical militants,” the Prime Minister said. “… We will contribute to the (region’s) peace and stability, in cooperation with the global community.”

As to the ISIS threat against two of his nation’s citizens, Abe called it “unacceptable.”

“I feel angry about it,” he said. “I strongly urge them to immediately release the hostages without harming them.”

Abe: ‘Terrorists should not be forgiven’

ISIS has asked for ransoms before, and apparently has been paid them. But rarely are such demands made publicly. Even rarer — unprecedented, in fact — is when the militant group puts its captives on video and threatens them, then lets them go.

Instead, ISIS has made a public show out of its threatening and killings of Western hostages, starting with August’s beheading of U.S. journalist James Foley.

While not participating in ground combat, both the United States and Great Britain have taken an active role in the anti-ISIS fight with airstrikes and training, arming and otherwise supporting groups — such as Iraq’s military, Kurdish fighters and moderate Syrian opposition — taking on the militants face-to-face.

That’s not the case for Japan, whose post-World War II constitution allows it to use its military only for self-defense. But Tokyo is a strong ally with Western powers, such as the United States, that have been singled out by ISIS.

In his remarks Tuesday in Jerusalem, Abe — who dealt with another hostage crisis involving Islamic militants in January 2013, when 10 Japanese citizens were caught up in the terrorist seizure of a natural gas facility in Algeria — said he had ordered Japanese officials to do the utmost to try to save the two men.

At the same time, the Prime Minister added, “Terrorists should not be forgiven, for any reason. I criticize (the taking of hostages) emphatically.”

A lost soul and a journalist

The aim is to safely bring home two men who were in the same war-torn region for very different reasons.

Like Foley and Sotloff, Goto went there to help tell the story of what was happening in Iraq and Syria. In recent months, ISIS militants have managed to take over vast swaths of both countries, ruthlessly going after many in their way who don’t share their extremist interpretation of Islam.

The ISIS video refers to him as “Kenji Goto Jogo,” but on his Twitter handle — and a photograph accredited to him — he’s just called Kenji Goto.

The freelance journalist reported for various Japanese news organizations about the situation in the northern Syrian battleground city of Kobani, which for weeks has been under siege by ISIS, and other areas.

The man purportedly shown along with him, Yukawa, is believed to have been captured in Syria in August while traveling with rebel fighters, according to the Japanese news agency Kyodo.

The 42-year-old claimed to have set up a company in Tokyo providing armed security services and posted videos online of his activities in Iraq and Syria.

But a report by the news agency Reuters in August portrayed him as a lost soul, who went to the Middle East searching for a purpose after losing his wife, his business and his home over the previous decade.

Kyodo reported previously that Japanese officials in Jordan had being trying to secure his release, including talking to various groups with possible connections to his captors.

So what happens next?

Abe spoke firmly Tuesday against the terrorists and their $200 million ransom demand.

What he did not do, however, is rule out the Japanese government paying ransom or negotiating with its two citizens’ captors.

Like most countries, Japan has never advertised that it or Japanese companies have paid ransom for hostages. In fact, Japanese government officials have at times denied such a practice, and Japan is a signatory to a 2013 G8 communique that stated, “We unequivocally reject the payment of ransoms to terrorists, and we call on countries and companies around the world to follow our lead to stamp this out.”

One reason for this policy is that ISIS and groups like it can use ransoms to fund their bloody campaigns. Paying ransoms also may give them incentive to take more hostages, thus putting more people at risk. And ransoms might not always work, since ISIS and other hostage takers aren’t usually seen as trustworthy.

Still, ruling out ransoms also rules out one peaceful way to free Goto and Yukawa. It’s possible someone else may intervene to negotiate their release, whether out of goodwill or in exchange for something else. Or troops from a Japanese ally could launch a raid to get to them, like the unsuccessful one this summer to free Foley.

Either way, others could play a role in this story before it’s done — hence Abe’s comment Tuesday that the international community “needs to deal with terrorists without giving in to them.”