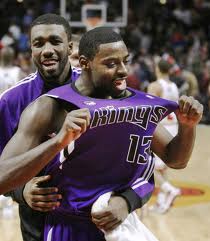 Sacramento’s efforts to build a new arena for the Sacramento Kings have never been closer to becoming a reality.

The city, the NBA and the Kings announced a tentative deal Monday to finance a new arena that would keep the team in California’s capital. The City Council is expected to vote on the plan March 6.

Sacramento Mayor Kevin Johnson, NBA Commissioner David Stern and the Maloof family, which owns the Kings, emerged from three days of talks in Orlando, Fla., – where they had been negotiating all weekend during All-Star festivities – to announce that the framework of a deal had been reached.

The full financing plan will be made public by Thursday.

The Kings almost moved to Anaheim, Calif., last year before Johnson and city leaders convinced the league to give Sacramento one last chance to help finance an arena. Seattle also had been making a renewed push for an NBA team.

The estimated $387 million arena, which would open for the 2015-16 season in the downtown Sacramento rail yards, is now within reach.

Johnson made a desperate pitch to the NBA Board of Governors last April to give the city a final chance to come up with an arena plan. He also bought time by presenting more than $10 million in commitments for new advertising, ticket purchases and other financial support from regional businesses for this season.

Despite attempts by Anaheim and Seattle to swoop in and lure the Kings, the fate of the franchise is in the hands of the Sacramento City Council – which has approved every arena measure to date under the current project. And the Maloof family – brothers Joe, Gavin and George – have made it clear they want to remain in Sacramento.