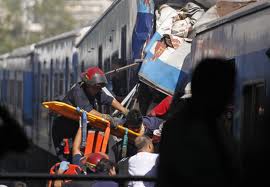 “The government and people of Argentina give their solidarity and weigh the pain felt by the families of the victims,” President Cristina Fernandez de Kirchner said in a statement declaring the mourning period. Memorials will be held outside Argentina’s Government House and Olivos, the presidential residence, the state news agency Telam reported.

“Never in my life had I seen anything like this,” Transportation Secretary Juan Pablo Schiavi told reporters hours after the accident, which occurred during the height of the morning rush.

Passengers told reporters the crash sounded like a bomb blast.

“The strongest impact was between the first and second car,” with the second plunging “about six meters into the first,” Federal Police spokesman Fernando Sostre said.

The train was traveling at 26 kilometers per hour (16 mph) when it entered the station around 8:30 a.m., according to Schiavi.

“We do not know what happened in the last 40 meters,” he said.

The train’s 28-year-old driver had just started his shift and had a good record, the transportation minister said.

Earlier Wednesday, Schiavi said authorities believed there were problems with the train’s brakes that caused it to smash into a barrier at the station.

Buenos Aires Trains, which runs the rail service, said it was cooperating with the federal investigation.

Wednesday’s crash was among the worst in Argentina’s history, Telam reported.