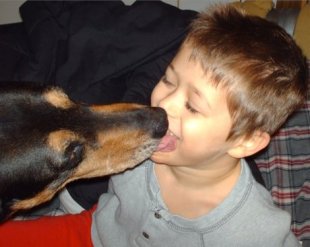 After sending his son to school wearing a wire, Stuart Chaifetz found out that his son, Akian, was being bullied …When his 10-year-old son, Akian, started getting into trouble at school, Stuart Chaifetz was stunned. The notes from Horace Mann Elementary School in Cherry Hill, N.J., said that Akian, who has autism, was having violent outbursts and hitting his teacher and his aide — behavior that the boy had never exhibited before.

“I could not understand why this was happening,” Chaifetz, a 44-year-old animal rights activist in New Jersey, wrote on his website. “I had never witnessed Akian hit anyone, nor could I dream of him lashing out as had been described to me.”

In October 2011, he met with Akian’s teachers and school therapists. A behaviorist was called in, but during several classroom visits he didn’t see Akian become violent. “He tried to create a scenario that would push Akian so far that he would lash out,” Chaifetz explained. “And Akian did not.”

“If Akian was pushed and didn’t do anything, what was setting him off?” his dad wondered. After six months of meetings yielded no answers, he decided that he needed to know what was happening in his son’s class. Like Akian, all of the other kids in his class also have autism, and complications from the disorder prevent them from being able to communicate to their parents about what goes on in the classroom.

“The morning of February 17, I put a wire on my son, and I sent him to school,” Chaifetz says in a video he created to showcase the audio clips. “What I heard on that audio was so disgusting, vile, and just an absolute disrespect and bullying of my son, that happened not by other children, but by his teacher, and the aides — the people who were supposed to protect him. They were literally making my son’s life a living hell.”

The recordings are raw and intense. Angry adults yell at kids to “shut up,” “shut your mouth,” and “knock it off.” Adults have inappropriate personal conversations in front of the children, discussing how drunk they were the night before, complaining about their husbands, and talking in detail about adult issues. More than once, an adult goads Akian to the point of tears — and then laughs at him.

“Go ahead and scream,” one adult hisses menacingly at Akian. “Because guess what? You’re going to get nothing… until your mouth is shut.”

“The six and a half hours of audio I had proved that my son wasn’t hitting the teacher because there was something wrong with him — he was lashing out because he was being mocked, mistreated and humiliated,” Chaifetz writes on his website, No More Teacher/Bully. “His outbursts were his way of expressing that he was being emotionally hurt at school.”

Chaifetz gave the entire six-and-a-half-hour recording to the Cherry Hill School district (you can hear more of the clips here). One aide, Jodi Sgouros, was fired. Another aide and the teacher, whom theCollingswood Patch identifies as Kelly Altenburg, were reassigned but not fired.

“I don’t know why the teacher wasn’t fired,” Chaifetz writes on his blog. “Maybe the District had no choice; perhaps tenure or HR regulations did not permit them to do so. I know that they were sincere and shocked when they found out what happened. I am willing to give them the benefit of the doubt in this.”

On Tuesday, officials at the Horace Mann School in Cherry Hill, New Jersey, directed calls from Yahoo! Shine to the Cherry Hill School District’s offices; a call to a spokesperson there was not immediately returned. Cherry Hill Public School District spokesperson Susan Bastnagel told the Collingswood Patch on Tuesday only that the incident is “an internal personnel matter that the district took seriously and handled appropriately.”

Chaifetz disagrees, and has started a Facebook page and launched a petition at Change.org calling for the teacher’s dismissal. He’s already gathered nearly 18,500 signatures. “No one who treats children like that, who calls them vicious names, who humiliates them, who batters them verbally, deserves to be a teacher,” Chaifetz says in the video.

“How is it possible that teachers and staff can do these things, and you have evidence — not just accusations, but evidence — and they’re still teaching?” he said in an interview with Babble.com. To me, that’s the bigger outrage here. How many times has this happened before? How many times will it happen again if I remain quiet?”

For his part, Chaifetz says that what he really wants from the teacher and aides involved is a public apology and a willingness to take responsibility for their actions.

“I want an apology, not for me, but so one day I can play this video back for my son and say Akian, you didn’t deserve anything that happened to you,” he says in the video. “I’m not going to sue anybody. I’m not going to file a lawsuit. It’s not about money. It’s about dignity. This is to reclaim my son’s dignity.”