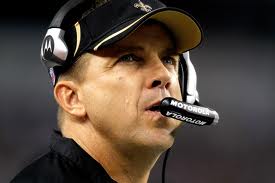 Sean Payton says he is sorry for the bounty scandal that has resulted in his season-long suspension and that he takes ”full responsibility” for it.

In a written statement released by the New Orleans Saints on Friday evening, Payton says he shares and fully supports the NFL’s concerns and goals concerning player safety.

Payton also says that respecting the game and the NFL shield – a reference to the league’s famous logo – is extremely important to him.

The coach says the Saints will implement all necessary protections and protocols, and that he will be ”more vigilant going forward.”

Payton says he also thanks team owner Tom Benson, his players and Saints fans ”for their overwhelming support.”