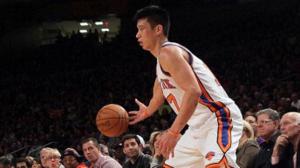 He and the Knicks had no answers.

Lin’s rapid rise from unknown to superstar was slowed big-time Thursday night by the Miami Heat, who overwhelmed the NBA’s hottest story with a swarming defense that the Knicks’ new starting point guard could not solve.

Forcing Lin into easily the worst game of his remarkable run as New York’s newest star, Miami topped the Knicks 102-88 — the eighth straight win for the NBA-leading Heat, all by at least 12 points.

Chris Bosh scored 25 points, Dwyane Wade added 22 and LeBron Jamesfinished with 20 points, nine rebounds and eight assists for Miami, which will go into the All-Star break with the NBA’s best record (27-7).

Lin’s final line: 1 for 11 from the field, eight points, three assists — a long way from the 23.9 points and 9.2 assists he had been averaging over his first 11 games in the Knicks’ rotation, when he breathed immeasurable life into a team that was floundering.

“First of all, he deserves all of the credit he’s been given,” Wade said. “We knew it was going to be a tough task guarding him. … He’s a good player, but we put a lot of pressure on him and it was a success.”

Lin turned the ball over eight times, saying afterward that the Heat defense made it difficult even to dribble. His last shot — like most of his others — bounced off the rim with 6 seconds left, the outcome already decided, and he simply walked quietly off the court into the locker room.

“A learning experience,” Lin said. “A tough one.”

But for a while, the game lived up to the hype.

Spike Lee, Floyd Mayweather and Chad Ochocinco all sat within seven seats of each other on one sideline,Mike Stanton and Logan Morrison of the Miami Marlins were on another sideline, and members of the New York Mets’ front office reportedly jumped aboard a helicopter for the quick trip from the team’s spring-training home in Port St. Lucie down to Miami.

Even the First Fan took note of the hubbub surrounding the game.

“In another life, I would be staying for the Knicks-Heat game tonight, then going up to Orlando for NBA All-Star weekend,” President Barack Obama told cheering students at the University of Miami earlier in the day. “But these days, I’ve got a few other things on my plate. Just a few.”

When Air Force One was headed to Orlando for a Thursday night fundraiser, yes, there were televisions tuned to Heat-Knicks on board.

And the Heat put on a show.

“We have some work to do,” said Carmelo Anthony, who led the Knicks with 19 points. “Nobody said it would happen overnight.”

J.R. Smith scored 14 for New York off the bench.

“I’m sure they were all geeked up for him,” Knicks coach Mike D’Antoni said of the Heat defense against Lin. “And they took the challenge and they did a great job. It’s hard to be Peter Pan every day.”

James became the NBA’s first player since 2008 to finish with at least 20 points, nine rebounds, eight assists, five steals and two blocks. The last one to do that? James himself.

“This has been about a three-week push for us and it’s a good way to end before the break,” Heat coach Erik Spoelstra said. “I think everyone in that locker room needs a handful of days. We’ve been really focused … to make this push. We played a team that with more time they’re going to improve and become a very dangerous team. They already are right now.”

If proof was needed that the Heat wanted to make a point against Lin, there was some clear evidence.

Exhibit A: Mario Chalmers stole the ball from Lin and went in for a two-handed dunk in the early minutes. Exhibit B: Norris Cole, Chalmers’ backup at point guard, did the same thing in the second quarter.

Those strip-and-scores were part of a six-turnover first half from Lin, matching his third-highest total in any half this season. Amare Stoudemire also had six turnovers in the first 24 minutes, the Knicks were outscored 30-16 in the paint, 12-1 on fast breaks and 12-3 off turnovers.

Nonetheless, Miami’s lead was only 51-47 at the break.

For all the fire the Heat were playing with, the Knicks were up to the task. Steve Novak came off the bench to make all three of his shots — all from 3-point range — and New York was right there even though Lin had two assists in the first 1:26 of the game and no others in the final 22:34 of the half.

“He’s a good player, a really good player,” James said of Lin. “And they’re going to do some great things. But for us, we come in and take care of business.”

James lowered a shoulder into Lin on one of Miami’s first fast breaks of the night, sending the guard back about 10 feet. In the second quarter, Wade pounced on a miss by James for a two-handed put-back slam, a play quickly followed by a James dunk — courtesy of a Lin turnover. On the next Heat possession, Stoudemire accepted a pass from Lin, not seeing Wade get behind him for an easy strip that led to a layup and 43-40 Miami lead.

Back and forth they went, just as everyone wanted.

“It’s always big when the Knicks come in,” Bosh said. “They have that New York-Miami thing. The crowd enjoyed it. And we enjoyed it.”

It was classic Knicks-Heat stuff, just like those playoff battles in the late 1990s and early 2000s. Bodies were flying, tempers were flaring, Tyson Chandler and D’Antoni picked up technicals arguing the same play in the first quarter … and more than a few Knicks fans who paid big money for tickets — the average price for the game on the resale markets was over $700, by one estimate — made their presence known loudly and often.

“It’s one game,” D’Antoni said. “And we’re not there yet. They’re there. They’re the team right now to beat for everybody. They’re playing better than everybody. And we’re trying to get our team together.”

He’s right. They’re not there yet.

Lin never got rolling, either. James, Wade and Bosh combined for 25 of Miami’s 29 points in the third quarter, James hitting a jumper with less than a second left to push the Heat edge to 80-66.

Lin checked back in with 7:06 to play, trying one last rush with the Heat lead then at 90-76. And the outcome was never in doubt after that.

“I’m not going to hang my head or anything like that,” Lin said. “I know I went out there and I played hard. Can’t win ’em all. Can’t have a great game every game. But at the same time, I need to understand, ‘OK, what’d I do wrong? How can I improve?’ I think that’s going to be exciting.”

Game notes
Wade spoke to the sellout crowd before the game, thanking them on behalf of the NBA and especially the six All-Star weekend-bound Heat players for their support the first half of the season. … A number of arena workers snapped photos of Lin as he warmed up on the court about two hours before game time. … In Orlando, where All-Star festivities were getting underway, NBA commissioner David Stern said “it’s fair to say that no player has created the interest and the frenzy in this short period of time, in any sport, that I’m aware of like Jeremy Lin has.”