Mavs lose to Knicks and Lin 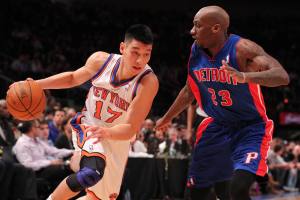 NEW YORK — Perhaps the turning point in the Knicks’ 104-97 victory over the Mavericks on Sunday occurred with 15 seconds remaining in the third quarter and New York trailing by five. Lamar Odom floated a careless backcourt pass in the direction of Jason Terry, and Jeremy Lin lunged in and stole it. Time seemed to stop momentarily, the building frozen in anticipation. Then Lin took a dribble, drifted to the basket and unfurled an emphatic dunk. A one-time 12-point Dallas lead was all but eradicated.

In many ways, the sequence mirrored the Knicks’ resurgence: one moment, awakening a dormant franchise. As he’s done on seemingly countless occasions, Lin electrified the Knicks.

“It just seems like in the heat of the moment, the better he [is],” said Knicks’ coach Mike D’Antoni. “He’s definitely fearless.”

Despite Carmelo Anthony’s seventh consecutive absence with a strained right groin, New York downed the defending champs. And just like that, coming off their weakest performance to date — an error-laden loss to the Hornets two nights before — the new-look Knicks notched their most resounding victory of the season.

“We had a lot of people that contributed tonight,” said Lin. “I think across the board the efficiency was just there.”

That began with Lin. The burgeoning superstar finished with 28 points and a career-high 14 assists, playing with a poise that far exceeded his age. He converted two game-changing threes in the fourth — the former over Dirk Nowitzki — and displayed a resiliency on par with any point guard in the league. Though he had seven turnovers, he showed marked improvements: He didn’t commit his first until an ill-advised drive in the closing seconds of the first half.

Then there was the supporting cast. Steve Novak connected on four crucial fourth-quarter three-pointers, and Tyson Chandler tallied 14 points and 10 rebounds. Amar’e Stoudemire and Landry Fields each added double-figures, and J.R. Smith delivered a made-for-Manhattan debut. After entering the game with 5:43 left in the first quarter, Smith poured in nine points over the next four minutes, demonstrating just how dangerous his addition can make the Knicks.

“J.R. Smith brings a punch and an element to the game that we haven’t had,” said Chandler. “Combine that with how we’ve been playing of late, and it’s special.”

If this was a barometer game, the Knicks passed with flying colors. And after torching one of the league’s stingiest defenses (through Feb. 18, the Mavs ranked fifth in points allowed at 91.1 per game), they might warrant consideration as a legitimate Eastern contender after all.

“We should be really good,” said D’Antoni. “The potential is there and it’s our job to maximize it.”

The key word is should, and that’s no knock on the Knicks. Plenty of questions remain, from Anthony’s impending return, to the influx of Baron Davis and Josh Harrellson. The answers will emerge slowly, and the Knicks’ true potential will likely take time to materialize.

They’ll also need to address temporarily lapses in concentration. The Knicks allowed a 7-0 Mavs run to open the second quarter and a 15-5 stretch to begin the third — thanks in large part to Nowitzki’s game-high 34 points — and left plenty of room for improvement.

“Our chemistry has to get right,” D’Antoni said. “Everybody has to adjust to everybody.”

But Sunday’s Madison Square Garden matinée was an unmistakable triumph, one of the definitive highs of D’Antoni’s four-year tenure. And with Melo slated to return Monday, things could soon get even better.

“I don’t wanna be 100 percent,” D’Antoni said before Sunday’s game, “but knowing Melo and knowing where he is, he’ll play tomorrow.”

Of course, expectations should be tempered. The Knicks are still .500 (16-16), slotted a half-game behind Boston for seventh place in the East. They’ve just begun a daunting three-week stretch, with the Hawks, Heat, Celtics, Mavericks and Spurs making up five of their next seven games. But given their improbable ascent into the spotlight, it’s hard not to get swept up in the excitement — and possibility — of it all.

“To be honest, it kind of reminds me of whenever we’d play the Spurs,” said Novak. “They always played at a pace where they just seemed like they knew they were gonna win. I sense that with us. We’re very even-keel.”

After the Lin’s fit-for-Hollywood theatrics endured their first setback two days prior, they staged their most captivating scene to date at the Garden. Linsanity, in fact, may be more alive than ever.

“The thing you can’t teach is what he has inside his heart,” D’Antoni said of Lin. “What he has in his heart is just huge.”

Even fairytales include conflict, and Lin’s is certainly no exception. But given his brilliant response to adversity — one befitting his incomparable star turn — he continues to prove that his emergence is no fluke. He’s already gotten the best of Deron Williams, Ricky Rubio and Jason Kidd, and is showing no signs of slowing down.

Knicks 104, Mavericks 97. Lin couldn’t have scripted it any better.