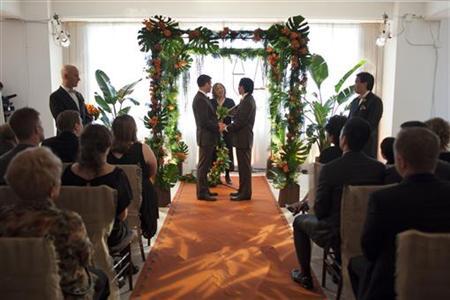 The Assembly vote of 42 to 33 affirmed a Senate vote from Monday, and the bill is expected to be sent by the end of Friday to Christie, a supporter of Republican presidential hopeful Mitt Romney. Christie has tried to deflect the issue by saying it should be settled by voters in a referendum. No U.S. state has ever approved same sex marriage in a referendum.

“I realize that for many in this chamber this is not an easy vote,” said Assembly Deputy Speaker John Wisniewski. “The fight for civil rights has never been an easy fight.”

Both chambers appeared to lack the two-thirds majority needed to override a veto. Christie’s spokesman said the governor would have no further comment on the legislation Thursday, but he has been emphatic in the past about his intention to swiftly veto it.

The action in the Maryland and New Jersey statehouses follows passage of legislation in Washington state. Gov. Christine Gregoire signed the Washington bill on Monday, but it will not take effect until at least June. Opponents are working to gather signatures for a ballot initiative in November that would block the legislation.

In addition to Washington, six other states and the District of Columbia have passed legislation allowing same-sex marriages.

New Jersey’s Democratic leadership, which controls both houses of the legislature, has made gay marriage a top priority this session, saying the state’s civil union law does not adequately protect same-sex couples.

“There is no evidence of wholesale trampling of civil rights,” he said.

The Assembly has until the end of the day Friday to send the bill to Christie, who has 45 days to veto the bill but has vowed to do so immediately.

Democrats do not currently appear to have enough votes to override the veto with a two-thirds majority, though they have until the end of 2013 to try.

The Senate would need 27 votes, or three more than voted in favor of the bill on Monday, to override a veto. The Assembly would need to find another 12 votes to reach the required 54.

Christie called Monday’s Senate vote a “good bunch of theater” and told reporters, “Well, they won’t get enough votes to override my veto.”

Christie has said he would prefer to see the state’s voters resolve the issue, a sentiment that was echoed on Thursday outside the Statehouse, where several hundred people at a rally carried signs saying, “Let the people decide.”

In Maryland, further debate was postponed until Friday in the House of Delegates amid uncertainty whether proponents of the “Civil Marriage Protection Act” had the 71 votes needed to advance it to the state Senate.

After adopting a single amendment Thursday evening to delay the effective date of the bill to January 2013 from October 2012, the House adjourned for the day. Debate is expected to resume Friday afternoon, when a raft of amendments will probably be offered from the House floor.

The extension of the debate over amendments into Friday likely means that a final vote in the House will not happen until next week.

Comparable legislation passed the Maryland Senate last year but failed in the House when Republicans were joined by a number of African-American Democrats in opposing the bill.

Democratic Gov. Martin O’Malley, a gay marriage supporter, has attempted to sway the black lawmakers, many of whom are hesitant to back an issue opposed by much of the state’s black clergy. The Capitol in Annapolis on Thursday was the scene of fervent last-minute lobbying by dozens of clergy members and others.

“I am opposing it based on my district that I represent,” Branch said, describing his district as working class. “It’s basically more geography for me than anything.”

So far, six states are able to perform same-sex weddings: New York, Massachusetts, Connecticut, New Hampshire, Vermont, and Iowa. Washington is poised to become the seventh, although the law could be blocked by a ballot initiative.

In California, a federal appeals court earlier this month overturned that state’s gay marriage ban, enacted through a 2008 ballot initiative. That sets up a possible showdown in the U.S. Supreme Court over the matter.

U.S. federal law defines marriage as between one man and one woman but the administration of President Barack Obama has chosen not to defend the law in court.