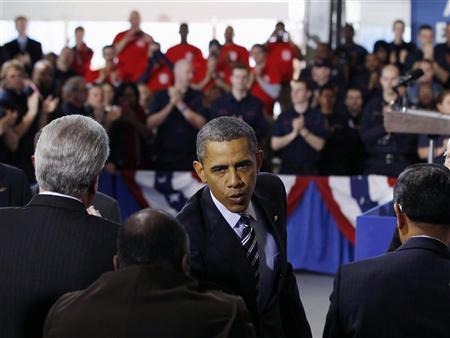 The decision to back Priorities USA, a fundraising group that has failed to gather steam, represents a tactical shift for Obama, who opposed the Supreme Court’s 2010 ruling that erased longstanding limits on corporate and union money in federal elections as an unconstitutional restriction of free speech.

Obama’s campaign manager Jim Messina said in an email to supporters that campaign and White House officials as well as some members of Obama’s cabinet would now attend and speak at Priorities USA fundraising events.

The president, first lady Michelle Obama, and Vice President Joe Biden would not be part of the effort and would focus their fundraising activities on events specifically for the campaign.

“Over the last few months, Super PACs affiliated with Republican presidential candidates have spent more than $40 million on television and radio, almost all of it for negative ads,” Messina said in the email.

“With so much at stake, we can’t allow for two sets of rules in this election whereby the Republican nominee is the beneficiary of unlimited spending and Democrats unilaterally disarm.”

Democrats had complained that Obama’s distaste for the Supreme Court decision in the so-called Citizens United case that spawned Super PACs had affected the success of the same groups formed to help him.

Restore our Future, a group supporting Republican presidential frontrunner and former Massachusetts Governor Mitt Romney, raised $30.2 million in 2011 and had cash on hand of $23.6 million at the end of the year, according to filings submitted last month.

Those figures confirmed fears within the Obama orbit that the eventual Republican nominee and his supporters could outspend the president in the general election, despite the Obama campaign’s own fundraising strength.

Bill Burton, a former White House deputy spokesman who helps run the Obama PAC, said the group was “committed to providing a balance” to the groups working on the Republican side.

“As has become evident in the past month, the only enthusiasm in the Republican Party is among oil company billionaires and investment bankers on Wall Street looking to defeat President Obama,” he said in an email.