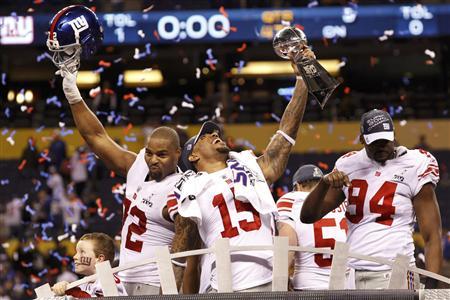 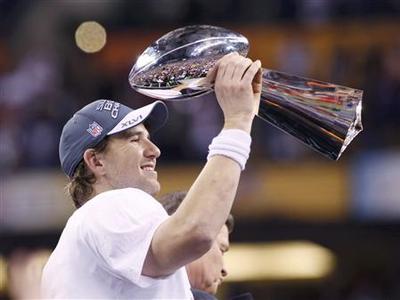 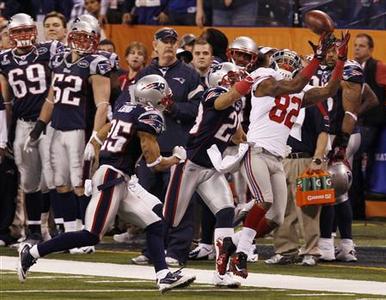 (Reuters) – The New York Giants reclaimed the greatest prize in North American sports with a nail-biting 21-17 Super Bowl victory over the New England Patriots on Sunday at Lucas Oil Stadium.

Inspired by their dynamic quarterback Eli Manning, the Giants erased an eight-point third-quarter deficit to steal the victory with a last-minute touchdown from Ahmad Bradshaw in a stunning repeat of their last Super Bowl win, also against the Patriots, four years ago.

“The greatest feeling in professional sports is to win the Super Bowl,” said New York’s Tom Coughlin, who at 65 became the oldest National Football League coach to win a Super Bowl. “What a wonderful experience it was to see the team come together like they did.”

The Giants had looked to have no hope of even competing for the National Football League title after enduring a four-game skid late in the regular season that put them in danger of missing the playoffs.

They needed to win their last two games to make the playoffs but their fairytale captivated New York City and Mayor Michael Bloomberg immediately announced the team would be honored with a ticker-tape parade on Tuesday.

For the Patriots, a second loss to their fierce New York rivals was unpalatable.

“You don’t feel good after you lose this game,” said New England head coach Bill Belichick. “It was wild out there. Hey, it’s the Super Bowl.

“I can’t fault the effort of any of our players. They played as hard as they could … We could have played a tiny bit better. It was obviously a very competitive football game.”

With the memories of their last Super Bowl still fresh, Sunday’s game was the Patriots’ chance to avenge their shock loss from four years ago but once again they were denied in the cruelest fashion.

It was a game that lived up to all the hype and expectation as the two teams slugged it out in front of a crowd of nearly 70,000 people and an expected record television audience.

Both teams scored two touchdowns in a game characterized by bruising defense and unrelenting tension. Each team made mistakes and there were jangled nerves all around but in the end it was the Giants who kept their cool when it mattered most.

Manning, who has emerged from the shadows of his older brother Peyton, the quarterback for the Indianapolis Colts, to win a second Super Bowl ring, was named most valuable player after completing 30 of 40 passes for 296 yards.

“It was a great game with two great teams,” Manning said. “We played to the very end. There were some big plays being made.”

The Giants jumped to a 9-0 lead in the first quarter after Tom Brady gave up a two-point safety on his first possession after being called for intentional grounding while throwing from the end zone and Victor Cruz caught a two-yard touchdown pass from Manning on the ensuing Giants possession.

The Patriots answered with a field goal Stephen Gostkowski in the second quarter then grabbed a 10-9 halftime lead when Danny Woodhead scored a touchdown to cap a 96-yard drive from New England quarterback Tom Brady.

Brady threw a Super Bowl record 16 consecutive completions and, when he connected with Aaron Hernandez for a touchdown in the third quarter, the Patriots looked headed for sure victory.

But the Giants once again found way to come back.

Lawrence Tynes kicked two field goals then Manning mounted an 88-yard drive, that included a spectacular catch from Mario Manningham, before Bradshaw scored the winning touchdown with just 57 seconds left on the clock.

“You have to give the Giants credit, they are a very good football team,” said Brady. “They put a lot of pressure on us, we just came up a little bit short.

“Every guy in the locker room wishes he could have done a little bit more and maybe the outcome would have been a little bit different.”