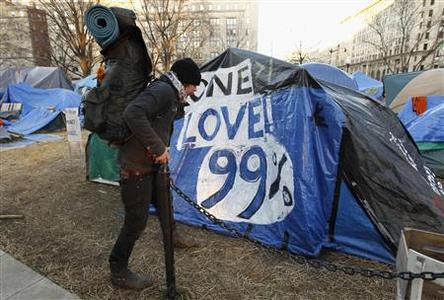 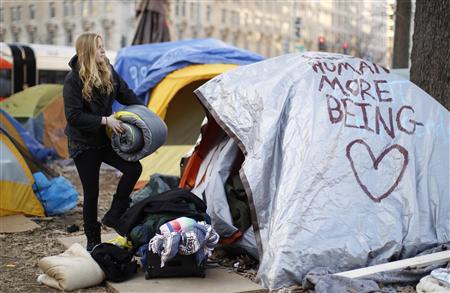 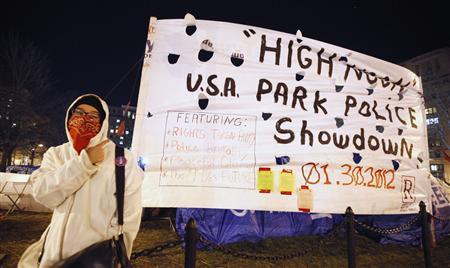 By Lily Kuo and Ian Simpson (Reuters) – Defiant anti-Wall Street protesters in Washington vowed to dig in on Monday as a police midday deadline for them to remove their belongings from two camps within sight of the White House passed without incident.

In its first challenge to the demonstrators, U.S. National Park Service said last week it would enforce a ban at noon against sleeping in McPherson Square and Freedom Plaza, where “Occupy” protesters have camped out since October. It ordered sleeping bags, pillows and other gear removed but said tents may remain as a protest symbol if flaps stayed open. Protesters at McPherson Square set up a huge tent off of a statue in the middle of the one-block square surrounded by office and government buildings – a makeshift “Tent of Dreams” to protest the order. “The people united will never be defeated,” participants chanted on Monday. While similar “Occupy” protests against social and economic inequality in other U.S. cities have been shut down by police, the demonstrations in the capital have survived an unusually warm winter and a permissive approach by federal authorities reluctant to provoke confrontation. Despite their small numbers, the Washington protesters enjoy outsized media attention because their camps are just blocks from President Barack Obama’s official residence and one is next to K Street, a wide thoroughfare that is home to many lobbyists and is synonymous with corporate influence in the capital. Fears of clashes mounted after police used a stun gun Sunday on one protester, who was later arrested. The deadline in Washington follows a new burst of unrest at “Occupy” protests in Oakland, California, over the weekend. Some protesters interviewed pledged peaceful resistance. “We’re not going to fight but we’re just going to make it difficult,” said Jake Roszack, 22, from New York, who had built a barricade of spare wood, tents and cardboard, around his personal belongings and those of his friends. More than 100 passersby, journalists and others gathered at McPherson Square to see what action authorities would take but the noon deadline passed without police intervention.   A U.S. Park Police spokesman, David Schlosser, said arrests would be made on a case-by-case basis but that none had been made so far. “We’re very pleased that we’re getting some voluntary compliance,” he said. At McPherson Square, participants turned their tents and sleeping bags into symbols of protest using donated art supplies. One tent read, “We’re still here.” A sign on a bench read “Eviction?? Bring it!!” Inspired by the Arab Spring, “Occupy” demonstrations began in New York City in September and spread across the United States and to other countries. Protesters are targeting the growing income gap, corporate greed and what they see as unfair tax structure favoring the richest 1 percent of Americans. Protesters in Washington also cite other pet causes, including joblessness, big agriculture and the homeless, some of whom sleep in the park. The U.S. capital, site of historic demonstrations over the decades, had so far done little to deter the protesters, drawing a rebuke from congressional Republicans who accuse the Obama administration of sympathizing with the groups and refusing to enforce park rules – a charge denied by park officials. The National Park Service regulates both parks and forbids camping on federal land not designated as a campground. The protests have also has irked local city officials who are concerned about squalor, rats and trash. Protesters had issued multiple calls on Twitter for reinforcements from New York, Boston, Philadelphia and other cities, but so far no large groups had arrived. The number of protesters in the Occupy DC camps fluctuates, but city officials estimate there are less than 100 in total. The Occupy protests had faded over the last few weeks but flared anew on Saturday when violence broke out in Oakland, California and 400 demonstrators were arrested during a night of skirmishes with police. Oakland has become a flashpoint of the protests and the arrests there were one of the largest mass detentions since the movement began. Obama has seized on the debate to call for higher taxes on the richest Americans and has made economic inequality a central theme of his administration and bid for re-election.