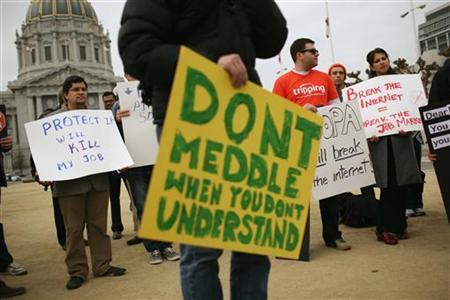 By Sarah McBride and Diane Bartz

REUTERS – Some members of the U.S. Congress switched sides to oppose antipiracy legislation as protests blanketed the Internet on Wednesday, turning Wikipedia dark and putting black slashes on Google and other sites as if they had been censored.

Content providers who favor the anti-piracy measures, such as Hollywood and the music industry, were scrambling to win back public opinion and official support.

Wikipedia, the world’s free online encyclopedia, shut down for a day. Google and others used the black censorship bars to draw attention to what had until recently been an obscure and technical legislative proposal to curb access to overseas websites that traffic in stolen content or counterfeit goods.

Many of the sites participating in the blackout urged their users to contact their legislators on the issue, a plea that brought quick results.

Several sponsors of the legislation, including Senators Roy Blunt, Chuck Grassley, Orrin Hatch and John Boozman and Marco Rubio, said they were withdrawing their support. Some blamed Senate Majority Leader Harry Reid for rushing the Senate version of the bill.

Meanwhile, friends of the bills stepped up their efforts.

Creative America, a studio- and union-supported group that fights piracy, launched a television advertising campaign that it said would air in the districts of key legislators. In Times Square, it turned on a digital pro-SOPA and PIPA billboard for the day – in space provided by News Corp, which owns Fox Studios.

The group also said it is sending a team of 20 organizers to big events around the country, including the upcoming Sundance Film Festival, to try to get voters to see the situation their way.

The legislation, known as PIPA in the Senate and SOPA in the House of Representatives, has been a priority for entertainment companies, publishers, pharmaceutical companies and other industry groups who say it is critical to curbing online piracy, which they believe costs them billions of dollars a year.

But Internet players argue the bills would undermine innovation and free speech rights and would compromise the functioning of the Internet.

In switching their positions, Blunt called the legislation “deeply flawed” while Rubio and Boozman cited “unintended consequences” that could stem from the proposed law. All said they still supported taking action against online piracy.

Other lawmakers, such as Senator Kristen Gillibrand, said they supported changes to the legislation.

The blackout affected thousands of sites and served as the culmination of several efforts online to fight the legislation. In recent days, for example, many Twittter users placed black “Stop SOPA” bands on the bottom of their profile pictures.

Even sites that didn’t black out their sites, which would have cost them a day’s worth of advertising revenue and angered some consumers, made their opposition to the bills plain.

“We can’t let poorly thought out laws get in the way of the Internet’s development,” Facebook chief executive Mark Zuckerberg said in a statement.

Zynga issued a blog post complaining that “the overly broad provisions we’ve seen in the pending SOPA and PIPA bills could be used to target legitimate U.S. sites and chill innovation at a time when it is needed most.”

While the Facebook and Zynga sites functioned as normal, others looked jarringly different.

Wikipedia mounted a 24-hour protest starting at midnight by converting their English page to a shadowy black background and warning readers that “the U.S. Congress is considering legislation that could fatally damage the free and open Internet.”

It included a link to help Internet users contact their representatives.

Smaller sites, such as Reddit.com and BoingBoing.net, were also dark, while icanhascheezburger.com placed a banner over its site alerting users to the situation and inviting them to click on a link for more information.

“It’s a way of engaging the public in something that had been a very much behind closed doors, kind of business as usual in Washington thing,” said Bill Allison, editorial director at the Sunlight Foundation, a lobbying watchdog group. “It’s a way to get the public aware and alerted to it, and somewhat on their side.”

But content providers said the protests were long on hype and short on substance, and that reaching voters one-on-one and in person would prove more effective. “We see this as a long battle,” said Mike Nugent, executive director of Creative America. He has been sending outreach staff to events like local festivals and movie screenings to get them to call their legislators and enlist their support.

The bills were seemingly on track for approval by Congress, but sentiment has shifted in recent weeks and an implicit veto threat from the White House over the weekend cast doubt on whether the legislation would pass.

Republican Representative Tom Price, head of the House Republican Policy Committee, said in a hallway interview, “I don’t think it is going anywhere.”

“There is real confusion about it, number one, but number two, there are real concerns about whether or not it would shut down the ability of entrepreneurs, new businesses and the like to utilize the Internet for their purposes,” Price said.

When asked about the anti-piracy legislation at a news conference on Wednesday, House Speaker John Boehner said lawmakers will continue to try to find support for it, but that it’s not there now.

“It’s pretty clear to many of us that there is a lack of consensus at this point,” Boehner said.

The protest drew some criticism ahead of its launch.

“This publicity stunt does a disservice to its users by promoting fear instead of facts,” Lamar Smith, Republican chairman of the House Judiciary Committee and a sponsor of SOPA, said in a statement on Tuesday. “Perhaps during the blackout, Internet users can look elsewhere for an accurate definition of online piracy.”

Former Senator Chris Dodd, who now chairs the Motion Picture Association of America, labeled the blackout a “gimmick” and called for its supporters to “stop the hyperbole and PR stunts and engage in meaningful efforts to combat piracy.”

The blackout harkens back to some similar movements on the Internet in recent years, particularly a 2007 protest over online radio royalties. Then, services like Pandora turned off their music for a day. Two years later, the music services and record labels reached an agreement over the payments.