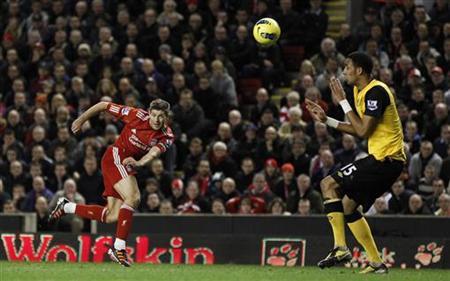 REUTERS – Steven Gerrard’s huge influence on Liverpool was clearly apparent again on Friday as he took just 31 minutes to inspire a 3-1 Premier League win over Newcastle United in his team’s final fixture of the year.

Gerrard, who said he was looking forward to seeing the back of 2011 after missing several months with a groin injury and an ankle infection, was introduced as a 59th-minute substitute with the score 1-1 and Newcastle looking strong.

By the final whistle the England international had scored the third goal, provided three clear-cut chances for Andy Carroll and lifted the quality and confidence of a team that had previously won only three times at home in the league this season.

Welsh striker Craig Bellamy netted twice against his former club but so convincing was Gerrard’s cameo display that the fit-again midfielder was named man of the match.

“To get on the scoresheet and get three points was a perfect return,” the 31-year-old Gerrard told Sky Sports. “I have had a terrible year with a lot of injuries but I just want to look forward.”

Liverpool manager Kenny Dalglish said: “Steven has a wee bit of mileage left in him yet. Today was a great reward for him and everybody who has helped him get back to fitness.”

With 12 minutes remaining Gerrard made a well-timed run into the penalty area, and after being found by a neat Jordan Henderson pass, he slipped the ball underneath Newcastle keeper Tim Krul from a narrow angle.

It was enough to move Liverpool (34 points from 19 games) up into fifth place before Saturday’s main programme of fixtures. Newcastle (30) are seventh.

Manchester United (45) can go three points clear at the top if they beat Blackburn Rovers on Saturday.

Leaders Manchester City, on the same points as neighbours United but with a superior goal difference, travel to Sunderland on Sunday.

France midfielder Yohan Cabaye headed Newcastle in front after 25 minutes but Bellamy equalised four minutes later with a precise low finish from the edge of the box that went through a ruck of players.

Eight minutes after Gerrard left the bench, Daniel Agger was fouled and Bellamy bent a free kick past Krul from 25 metres.

Newcastle went close in the 70th minute when Demba Ba’s improvised flick was heading for goal until Martin Skrtel raced towards his own line to pull off a dramatic clearance.

England striker Carroll, bought from Newcastle in January for a fee of 35 million pounds, had another frustrating night, fluffing one clear chance and sending a header from a Gerrard cross against the bar.

(Writing by Stephen Wood, editing by Tony Jimenez. To comment on this story: sportsfeedback@thomsonreuters.com)