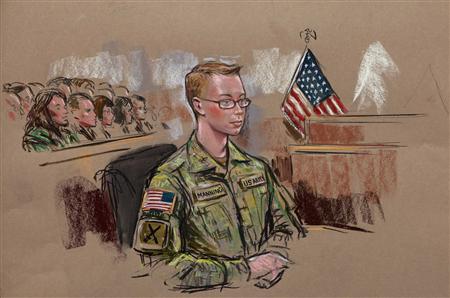 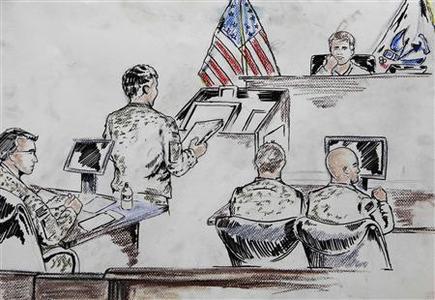 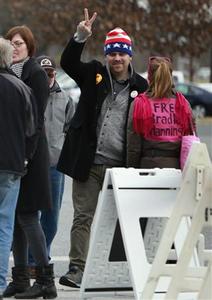 (Reuters) – A key witness was excused from testifying in the case against Army intelligence analyst Bradley Manning on Sunday after he invoked his right against self-incrimination at a hearing about the largest leak of classified documents in U.S. history.

Sergeant First Class Paul Adkins invoked his right against self-incrimination as he began answering questions at a proceeding to determine whether there was sufficient evidence to court-martial the 24-year-old Manning on charges including aiding the enemy, which carries life imprisonment.

Manning is charged with downloading massive data files from the military’s classified network when he was a U.S. Army intelligence analyst in Iraq, and providing them to anti-secrecy website WikiLeaks.

The defense has portrayed Adkins, at the time a master sergeant in charge of security at the facility where Manning worked, as someone who should have recognized the private’s troubled emotional state and acted to revoke the security clearance that gave him access to classified U.S. documents.

Manning’s attorney, David Coombs, argued that Adkins should not be excused because he was not under criminal investigation in the case, but the prosecution declined to grant him immunity to testify and he was excused.

A second intelligence analyst who worked with Manning, Warrant Officer 1 Kyle Balonek, also invoked his right against self-incrimination and was excused from testifying on Sunday. He was one of the most experienced analysts in the unit.

Coombs argued on Saturday that Manning had displayed warning signs of emotional instability before his alleged wrongdoing and struggled with his gender identity.

In one incident, Manning “got furious and upset, flipped a table during the outburst” and sent a computer crashing to the ground, Coombs said. Manning had to be restrained over fears he was headed for a weapon.

Captain Casey Fulton, an Army intelligence officer who worked in the same secure facility as Manning, testified that another time she saw him curled up on the floor with his arms around his knees as Adkins spoke to him.

Fulton also testified that later that night she overheard a commotion in which Manning allegedly struck a female superior, which was also reported to Adkins and resulted in Manning being moved to work in the supply division.

As it cross-examined prosecution witnesses on Sunday, the defense team continued to suggest that Manning should not have had access to classified documents, given his emotional state.

Fulton, who used Manning in her work preparing for the Iraqi election, rejected suggestions that supervision of lower-level analysts like Manning was lax.

“It’s impossible to supervise 100 percent of the time,” she said. “There’s a limited amount of supervisors and you can’t supervise everyone at every second of the day. (You) trust that they’ll safeguard the material the way they’ve been taught.”

Sergeant Chad Madaras, who worked in the same facility as Manning during the day and used the same computer, acknowledged that soldiers regularly used classified computers to play music, movies and video games.

The video shows a 2007 U.S. helicopter attack that killed a dozen people in Iraq, including two Reuters journalists. U.S. investigators say they have found a rewritable CD with that video in Manning’s possession.

Captain Thomas Cherepki, an information systems manager who oversaw networks at Manning’s facility, said intelligence analysts like Manning had to have the ability to copy information from their classified machines onto discs to share data with each other and with locals.

“There was no technical restriction put in place by me or any of my soldiers to prevent that from happening,” he said. “The only thing that would prevent that, in my view is trust that the soldier would do what’s right.”

The prosecution has portrayed Manning as a well-trained analyst who understood his responsibilities but violated them. The defense has tried to sidestep the question of blame and focus instead on his mental state.

Manning’s brigade chief, Captain Steven Lim, on Saturday testified that Adkins had received an email in April 2010 in which Manning said he suffered from a gender identity disorder that was affecting his life, work and ability to think.

The email included a photo of Manning as a woman. Lim said Adkins did not tell him about the email until after Manning’s arrest. Manning, it was disclosed during the proceedings, has created a female alter-ego online, Breanna Manning.

Manning was arrested last year after disclosing his data thefts to former hacker Adrian Lamo, who turned him in to U.S. authorities.

In Internet chats with Lamo, Manning said he would bring CDs to his workplace and load them with downloaded data from the military’s Secret Internet Protocol Router Network, known as SIPRNet, Lamo told Reuters in a previous interview.

He wrote to Lamo: “I’m a high profile source … and I’ve developed a relationship with Assange,” according to details of the chats confirmed by Lamo to Reuters.