The leader of a controversial religious sect at the center of the coronavirus outbreak in South Korea apologized Monday as the city of Seoul has started a murder investigation into the group, saying the church refused to cooperate with efforts to stop the virus.

The head of Shincheonji Church of Jesus, Lee Man-hee – who claims he is the second coming of Jesus Christ and will take 144,000 people to heaven, as promised in the Bible – got on his knees and bowed at a hastily arranged news conference Monday, according to Straits Times.

ADVISER TO IRAN’S SUPREME LEADER DIES FROM CORONAVIRUS, AS OTHER TOP OFFICIALS INFECTED

In the largest outbreak outside of China, the majority of the country’s more than 4,335 confirmed cases are members of the secretive group, labeled a cult in South Korea and by the Christian community, according to a spokesman for the church. 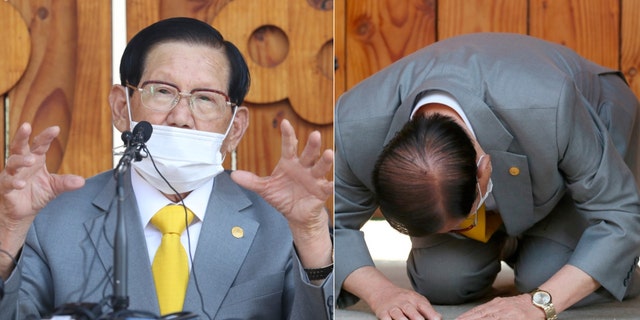 Lee Man-hee, a leader of Shincheonji Church of Jesus, bows during the press conference in Gapyeong, South Korea, Monday, March 2, 2020. In the hastily arranged news conference Lee, the 88-year-old leader of a religious sect which has the country’s largest cluster of infections, bowed down on the ground twice and apologized for causing the “unintentional” spread of the disease. (Kim Ju-sung/Yonhap via AP)

“We did our best but were not able to stop the spread of the virus,” the 88-year-old leader said at the news conference in Gapyeong, northeast of Seoul.

“I’m really grateful, but at the same time, asking forgiveness. I never thought this would happen, even in my dreams,” he told reporters, before bowing low twice in a traditional sign of humility and regret.

Of the confirmed cases, 3,081 are from the southern city of Daegu and 73 percent of these cases have been linked to the Shincheonji Church near there. Park Won-soon, mayor of Seoul, said Lee and other leaders of the church could have prevented such a mass spread if they had cooperated with authorities sooner. 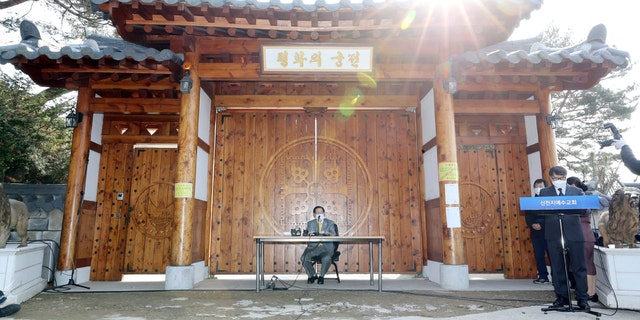 Lee Man-hee, a leader of Shincheonji Church of Jesus, speaks to the media during the press conference in Gapyeong, South Korea, Monday, March 2, 2020. (Kim Ju-sung/Yonhap via AP)

Seoul city officials filed a criminal complaint with the Seoul Central District Prosecutors’ Office asking for an investigation of Lee and 12 others on charges of murder and disease control act violations.

A member of the sect, known as Patient 31, attended two services in Daegu before spreading it to many others and traveling around the country undetected. The Korea Centres for Disease Control and Prevention (KCDC) said some members visited Wuhan, where the virus emerged last year, though it is investigating whether that played a role in the outbreak.

“You would be 5 centimeters away from the person who sits next to you, and have to say ‘Amen’ after every sentence the pastor speaks — it’s the best environment for the virus to spread,” An So-young, a 27-year-old who left the group, told Reuters. 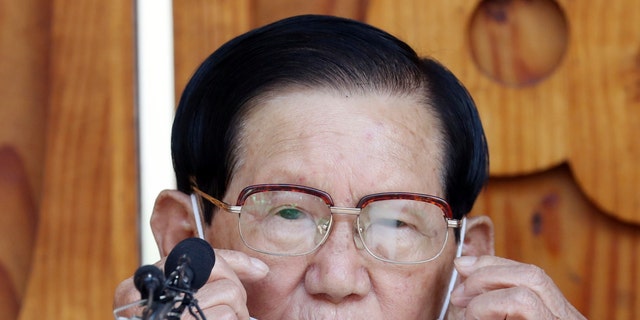 On Friday, Lee called the virus the “devil’s deed to stop the rapid growth of Shincheonji,” according to a post on an internal app used by members.

Church spokesman Kim Shin-chang told the BBC they hesitated to list of members, students, and buildings to authorities because of previous “hate crimes and violations of human rights…that have led to death” against the group.

“We were worried about releasing this information because of the safety of our members,” Kim said.

The Associated Press contributed to this report.