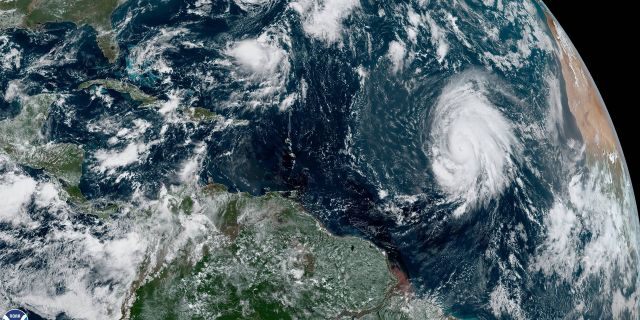 The body of one of the crew members from a tugboat that sent a distress call Thursday in the far-east Atlantic as the mighty Hurricane Lorenzo churned nearby was found dead at sea, officials announced Monday, days after three others were found alive on a life raft and as rescuers search for 10 more crew members from the sunken ship.

The vessel’s operator, the French-based shipping company Bourbon, said in a statement Monday that the body of one of the crew members of the Bourbon Rhode was located by an aircraft involved in the search. The body was recovered by one of the five commercial vessels that have assisted in search efforts.

A Message from AT&T TV

All your favorite entertainment together in one place. Order online and get a $100 AT&T Visa® Reward Card*

“All our thoughts and prayers go to his family and loved ones,” Gaël Bodénès, Chief Executive Officer of Bourbon, said in a statement. “This tragedy affects all Bourbon employees who express their full support to the seafarers’ families. We remain fully mobilized on search operations to find the other missing seafarers and I would like to express our gratitude to the rescuers, all the teams of the CROSS (Regional Operational Centre for Surveillance and Rescue) and the teams of the crisis cells who are working tirelessly to this end.”

On Saturday, a lifeboat with three crew members from the tug supply vessel was spotted by a French Navy aircraft. The three crew members, who were rescued by a commercial vessel that was in the area to assist rescue teams, were under medical observation.

The lifeboat found Saturday that was carrying three crew members from the sunken tugboat Bourbon Rhode as seen in this photo by Marine Nationale, the French Navy. (Marine Nationale via Facebook)

“It has been confirmed that the vessel has sunk,” Bourbon said in a statement. “The search continues to be carried out in weather conditions that are improving.”

The Bourbon Rhode, a tug supply vessel built in 2006, was traveling about 1,200 nautical miles off Martinique and about 60 nautical miles east of the eye from Hurricane Lorenzo — then a Category 4 storm — when the crew reported trouble.

“In particularly adverse weather conditions, the 14 crew members are facing a water ingress in the rear part of the vessel,” the company said at the time when the rescue mission was launched.

Hurricane Lorenzo can be seen swirling in the eastern Atlantic on Thursday, the day the ship reported problems. (NOAA/GOES East)

Lorenzo roared to life on Thursday when it quickly strengthened to what one meteorologist at the National Hurricane Center described as a “beastly hurricane,” with winds of 130 mph that had hurricane-force winds extending 45 miles from the center and tropical-storm-force winds that stretched outward up to 255 miles, along with waves that reached more than 20 feet.

The storm ramped up intensity Saturday night to a Category 5 storm and grew larger, with hurricane-force winds growing up to 80 miles from the center of the storm and spawning rough seas with large swells affecting the northeastern coast of South America and the Lesser Antilles.

On Friday, officials said that a cargo ship in the area reported that weather conditions on the outer end of Lorenzo were still “particularly adverse.”

The following day, the French Navy said on Facebook that a Falcon 50 aircraft from Dakar went out to the area where an emergency beacon last placed the ship and found the life raft with the three men on board. Two of the three men were Ukrainians, Vasyl Kyrylych, the director of the consular services department at the Ukrainian Foreign Ministry, said on Twitter.

The French Navy has deployed a Falcon 50 aircraft to assist in search efforts. (Marine Nationale via Facebook)

French officials said the ship had three other lifeboats they were continuing to search for.

French Maritime Rescue Coordination Center Philippe Bricquer told weather.com the emergency beacon indicated the ship was in the center of the hurricane.

“They were a little bit north of the eye,” Bricquer told weather.com.

On Sunday, the company said that five commercial vessels have changed course to bring assistance to rescue teams. A plane from the NHC that was being used to gather data on the hurricane was also being used in the search.

Officials said in the middle of the night “a capsized fast rescue craft” was spotted first by the NHC aircraft and then by the Falcon 50, and that a commercial vessel engaged in the operation was headed in its direction in order to try to recover it.

The tug supply vessel Bourbon Rhode was built in 2006. (Bourbonoffshore.com)

“Bourbon’s crisis cell and teams remain fully mobilized to keep track of the situation and maintain contact with the families of the crew members, bringing them their full support in this difficult time,” the company said.

Besides the commercial vessels and aircraft, the French navy’s surveillance frigate “Ventôse” and “Panther” helicopter will also join the search on Monday. Bourbon, a service provider for the offshore oil and gas industry, has been coordinating search efforts out of the French port city of Marseilles, according to Radio Free Europe.

“Rescue operations are continuing to find the other crew members, with significant maritime and air search resources deployed by the French and American authorities,” officials said Monday.