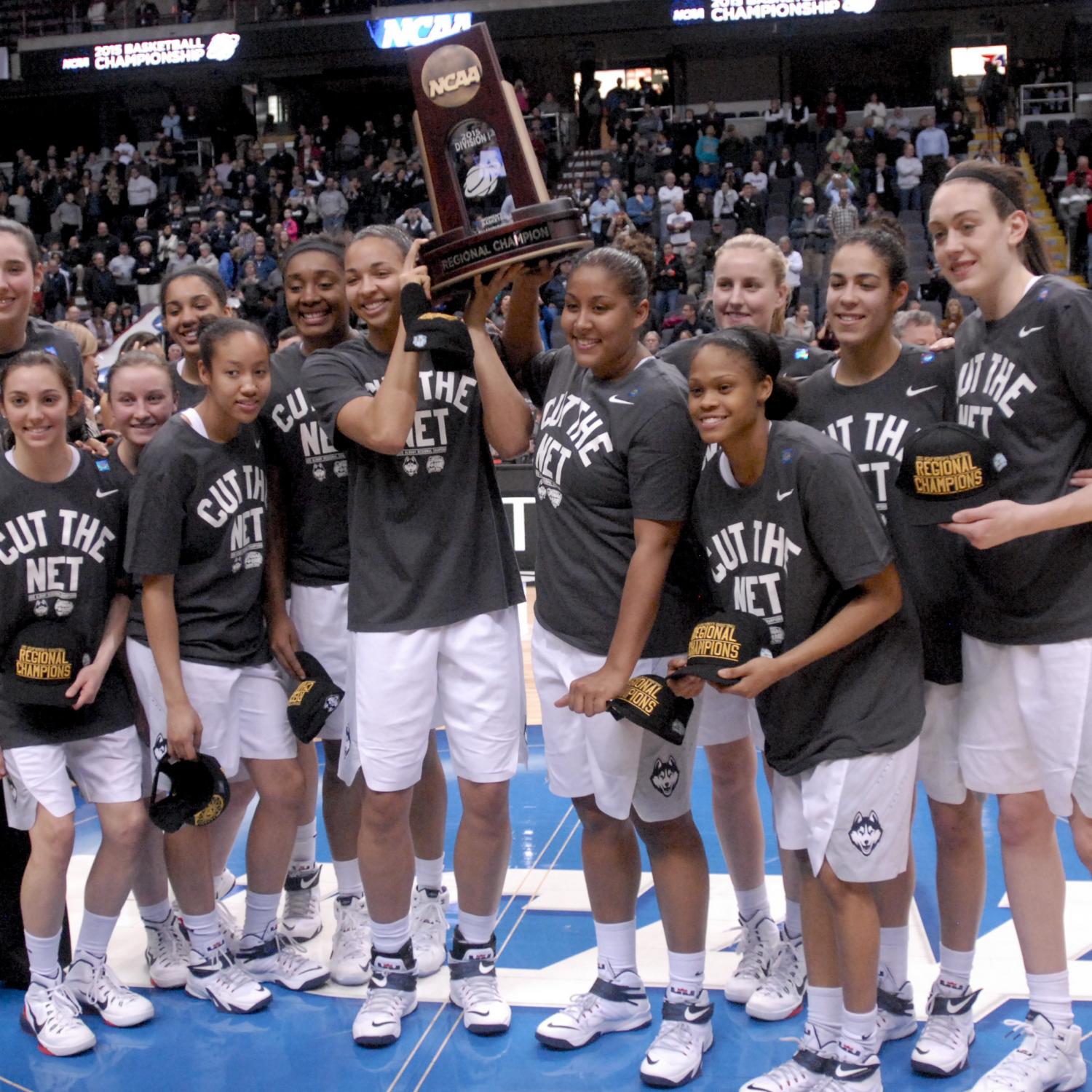 Human nature being what it is, this third consecutive national title, a fifth in seven years, a tenth overall, could have been collected and cataloged by the Connecticut women’s basketball team, positioned inside a crowded trophy case before the grinding pursuit of the next begins all too soon.

But there was Breanna Stewart on Tuesday night at Amalie Arena, the three-time Associated Press Player of the Year, first female three-time NCAA tournament Most Outstanding Player, lifetime All Everything and backbone of the Huskies, sob-smiling as the seconds bled away from a tougher-than-expected 63-53 win over perennial near-miss Notre Dame.

There was Stewart and junior guard Moriah Jefferson scurrying on the floor, among the feet of cameramen and onlookers to scrape confetti into “National Champions” hats, just to dump it on the well-coiffed head of their coach, Geno Auriemma, who had just tied legend John Wooden of the UCLA men’s program with ten national titles.

And there was Auriemma, ascending a ladder yet again, scissors in hand, pausing and then turning to ask a manager with a hand gesture accompaniment.

“All three?” he asked, referring to the three strands of net still attached to the rim.

All three. It was likely accidental symbolism, but it worked well. Three snips for three consecutive national championships. Three more souvenirs accrued by a 30th-year coach of one of sport’s most oppressive dynasties, and the elite players who congregate in Storrs, Conn., to be tested, tormented and turned into champions.

“It’s a feeling I can’t really explain,” said Jefferson, who co-led all scorers with 15 points with five assists and four steals. “I think you come into college having these dreams and to do it and to know we had a goal and we have three of them now. It’s crazy.”

And giddy. And fresh every time, they said.

“No, we don’t take things for granted here at all,” Stewart said, still emotional in the locker room long after post-game ceremonies had concluded. “I think that the amount of pressure we put on ourselves to get back here … this is how you make your season perfect. There is no other way to go out with a great season than to become national champions. That’s something some of our freshmen have never experienced before and every time you experience it, you want to enjoy it like you’ve never done it before.”

The championships all feel different, coach and players say, because teams and seasons evolve differently. Auriemma admits he didn’t much like the personality of this group in the fall even before its lone loss of the season, 88-86 in overtime to Stanford. They grew together and learned to trust each other, he said, and ultimately at 38-1, celebrated this championship together. Assessments of the career’s work, he said, have to wait.

Scarily for everyone else, including Notre Dame — which has played in five straight Final Fours but not won a national championship since 2001 — UConn could be too much again next season. Stewart, the first Most Outstanding Player for three consecutive seasons, returns and is poised to fulfill her stated freshman year goal of four championships. Next year, if she and the Huskies can maintain their new version of the status quo, she will surpass former UCLA center Kareem Abdul-Jabbar, who was named MOP three times in his career. That, she said, shouldn’t even be a possibility.

“I think Moriah should have gotten the MOP,” Stewart said. “I think the way she played was phenomenal this past two games (with a combined 29 points and nine assists). I think that people wanted to give it to me just because it was my opportunity to win three in a row.”

Senior Kaleena Mosqueda-Lewis personified every senior or retiring veteran’s dream by co-leading with 15 points and hitting a 3-pointer and two-point field goals in succession to stem what was Notre Dame’s last, best rush in the final five minutes and build an 11-point lead. Going out well was its own reward.

“It’s special for us every time we win a national championship,” she said. “Every year is different. Every year has its own trials and tribulations and I don’t think at all we take it for granted. We get just as excited whether it was our first one or our third one. I think we’re just so excited being able to win together.”

“Together” at UConn is a broad term. With Auriemma a common thread between three decades of national champions, All-Americans, pro players and Olympians, alums with expectations are ubiquitous, especially in the spring. That, Mosqueda-Lewis said, helps foster a perpetual expectation that prevents complacency or ambivalence to success.

“It’s the culture that coach Auriemma and (associate head coach Chris Dailey) have built since they got to UConn,” she said. “Their expectations are so high that you’re forced to kind of try and reach them. I think it’s just something you get used to over the years as you stay here, as you practice here and as you grow as a player. And also you see all the former players that come back to the Final Four and you pay it back to them. They’re the ones that started this history here.”

And when you burnish it, you enjoy it.​