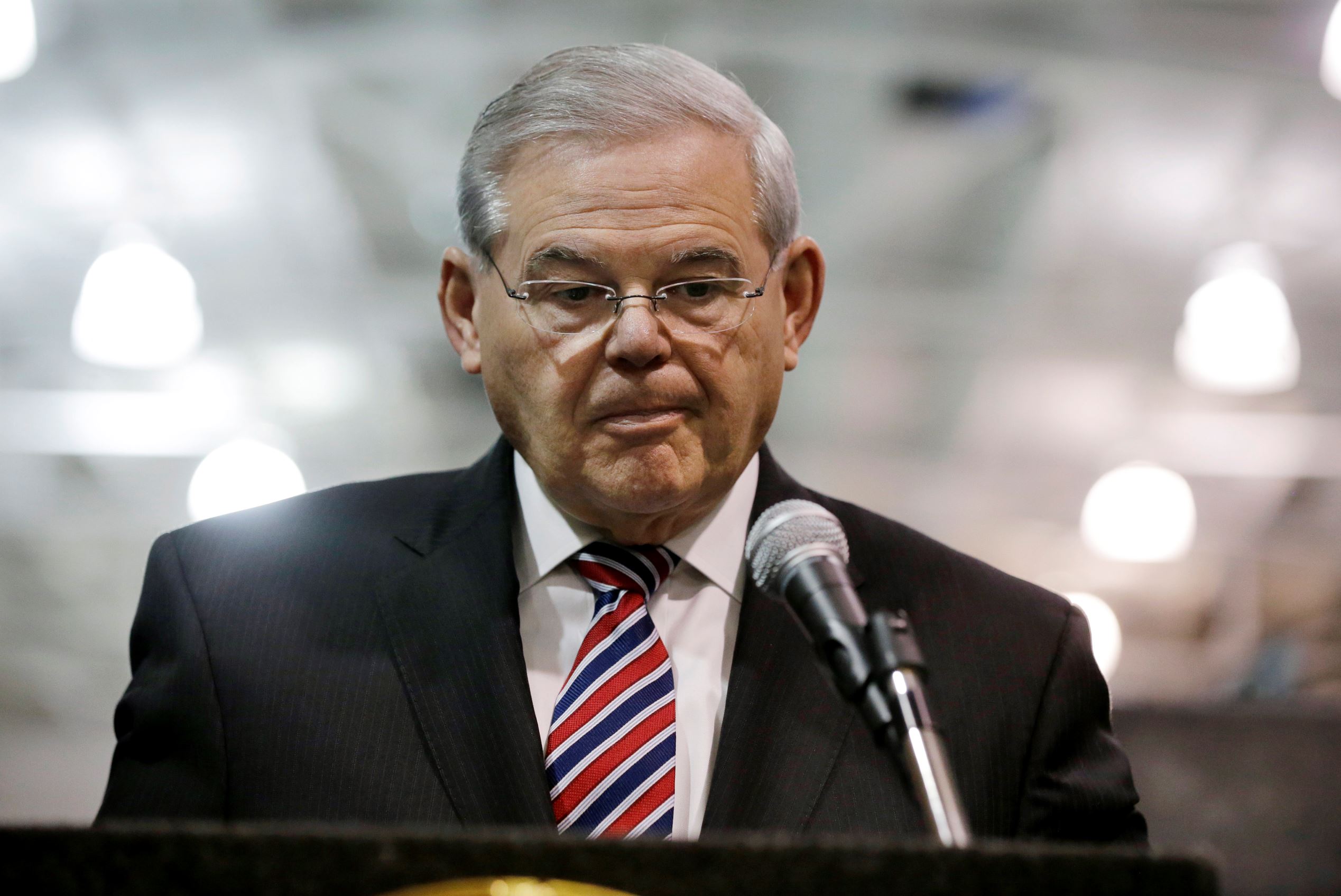 Menendez has been charged with 14 counts, including conspiracy to commit bribery and honest services fraud, in connection with his relationship with Salomon Melgen, a Florida ophthalmologist and political donor. Melgen has also been charged.

The Justice Department alleges that Melgen bribed Menendez with loads of gifts including use of private jets, a Caribbean villa, a luxury hotel room in Paris, an exclusive Dominican resort, we well as donations to his legal defense fund set up to pay for legal fees associated with federal and congressional ethics investigations.
The 68-page indictment charges that Menendez hid a number of those gifts and did not report any that he received between 2007 and 2012.

In return for those and other favors, Menendez allegedly helped Melgen secure immigrant visas for his “foreign girlfriends” and meddled in a multimillion-dollar Medicare overbilling claim concerning Melgen, according to the indictment.

“The job of an elected official is to serve the people,” Richard Frankel, the FBI special agent in charge of the case, said in a statement. “The citizens of New Jersey have the right to demand honest, unbiased service and representation from their elected officials at all levels of government.”

“The purpose of the conspiracy was for the defendants to use Menendez’s official position as a United States Senator to benefit and enrich themselves through bribery,” the indictment adds.

Speaking Wednesday night at a Newark press conference, Menendez was defiant, slamming the Justice Department and predicting “vindication” for himself.

Menendez doubled down on his pledge to keep his Senate seat, adding he is “confident at the end of the day that I still be vindicated.”

“I am angry and ready to fight,” he said, adding he has “always conducted myself in accordance with the law.”

The indictment also claims that Menendez pressed the State Department to give Melgen’s company “exclusive cargo screening services” at ports in the Dominican Republic and pressured U.S. Customs and Border Protection not to donate equipment to the Dominican Republican that monitored shipping containers in fear that it could harm Melgen’s cargo-screening business.

“Our system of justice is designed to be fair and impartial, and it presumes innocence before guilt,” he said in a statement. “I won’t waver in my commitment to stand alongside my senior Senator to serve our great state. Our nation and state face critical issues and I will continue to partner with Senator Menendez to take on the challenges before us.”
The National Republican Senatorial Committee (NRSC) quickly pounced on the news of the indictment, chastising Menendez for causing a distraction with his “ethical lapses” and characterizing the charges as indicative of all Democrats.

“With today’s indictment, the FBI and the Justice Department made it clear that Senator Menendez has betrayed the trust of New Jersey families,” NRSC spokeswoman Andrea Bozek said in a statement.

The Justice Department has been leading an inquiry into Menendez for years. There have been allegations that the senator inappropriately used his position to help Melgen’s business interests, though Menendez has steadfastly denied them.

Edward J. Loya Jr., a former prosecutor in the DOJ’s Public Integrity Section who is now counsel at Venable LLP, said that while Menendez should be seen as innocent until proven guilty, he thinks that it’s a “very difficult case” for the senator to win.

“These are official acts that don’t have a clear explanation other than Sen. Menendez using his position to benefit his friend who was paying him gifts,” Loya said.

Loya added that in public corruption cases, the public official is the “principal target” of any investigation.

“I don’t think it would be unusual if the government were to make a reasonable plea offer requiring Dr. Melgen to accept full responsibility for all his conduct that’s alleged in the indictment in exchange for his cooperation,” Loya said.

Menendez came to Washington as a freshman congressman in 1993. He was appointed to his Senate seat in 2006 and won it outright that same year. He was reelected in 2012.

He ascended to a leadership position quickly. From 2009 until 2011, he served as chairman of the Democratic Senatorial Campaign Committee.

Menendez is also an authority on foreign policy. As chairman of the Senate Foreign Relations Committee in the last Congress and its current ranking member, he has opposed the Obama administration’s efforts to normalize relations with Cuba and strike a nuclear deal with Iran.

At a press conference last month, despite reports of impending criminal charges, Menendez said that he would not vacate his seat even if he faced prosecution.

“I fight for these issues and the people of our country every single day,” he said. “That’s who I am, and I am not going anywhere.”