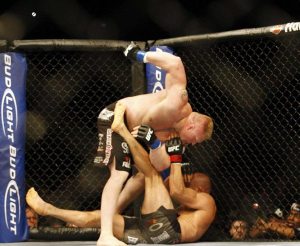 Add Daniel Cormier, Cain Valasquez, Ryan Bader, Jon Jones, and King Mo Lawal to list of mma legends below and the MMA world begins to get the message.  Wrestling simply makes for the best overall fighting base. The recent influx of fighters in MMA that are either champions or top ten in the respective weights sends MMA a strong message, wrestlers dominate any style as a base, and is the kryptonite for Gracie Ju Jitsu or any other Brazilian Ju Jitsu.

MMA Legends that were accomplished wrestlers

Dan Henderson
You’ll soon see Henderson (blue trunks) lead Team USA on the ninth season of the MMA reality series “The Ultimate Fighter.” But in 1992, and again in 1996, Henderson was leading Team USA as a Greco-Roman wrestler at the Olympics. A year after the ’96 Games, Henderson began training in mixed martial arts, in which he now owns a 24-7 record after becoming the first fighter to simultaneously hold titles in two weight classes in a major organization (he was the welterweight and middleweight champ in PRIDE).

Dan Severn
A four-time All-America at Arizona State and the former wrestling coach at ASU and Michigan State, Severn earned numerous national and international wrestling awards. He set the U.S. record for victories by pin from 1976 to 1992. As the first elite wrestler to step foot in the Octagon, Severn went on to compete in a jaw-dropping 109 MMA fights, earning victories in 86.

Johnny Hendricks
Arguably one of the best college wrestlers to step on the mat in the past 20 or so years, Hendricks won two NCAA titles while at Oklahoma State. Since his conversion to mixed martial arts, Hendricks holds a 5-0 record. His first WEC victory was against Justin Haskins in December. He also defeated Alex Serdyukov at WEC 39 in the promotion’s final welterweight match.

Mark Coleman
A wrestler since his teenage years, Coleman became an NCAA champion at Ohio State. After later earning a spot on the 1992 U.S. Olympic wrestling team and placing seventh overall in Barcelona, Coleman switched gears and made the jump to mixed martial arts. In his first professional fight, at UFC 10 in 1996, he took on Moti Horenstein, whom Coleman submitted just 2:43 into the first round via strikes. In his lengthy MMA career in both the UFC and PRIDE, Coleman compiled a 15-9 record.

Jon Fitch
Fitch (red trunks) was a four-year letterman with the Purdue wrestling team, and was even named team captain. Since his first professional MMA fight in 2002, he has racked up 18 wins in 21 matches — one of which was a split-decision victory over Diego Sanchez at UFC 76.

Josh Koscheck
At Edinboro University of Pennsylvania, Koscheck (black trunks) won an NCAA Division I wrestling championship and was an NCAA All-America four times. Since he began his professional mixed martial arts career in 2004, Koscheck has amassed a 12-4 record.

Kevin Randleman
While at Ohio State, Randleman won, not one, but two Division I wrestling championships at 177 pounds, and, in 2004, he was inducted into the OSU Hall of Fame. Randleman began his MMA career in Brazil, where he earned a 5-1 record in Universal Vale Tudo Fighting. Having since fought in various promotions, including PRIDE, the UFC and Sengoku, Randleman has earned a 17-12 record.

Matt Lindland
Before he was a mixed martial artist and before he was a politician, “The Law” Lindland was a Big 12 conference champion and All-America wrestler at the Nebraska. He later traveled to Sydney, Australia, where he competed for the U.S. Greco-Roman wrestling team and won the silver medal at 76 kg. Now fighting with Affliction, Lindland has an MMA record of 21-6.

Tito Ortiz
Before he was a UFC champion and mixed martial arts superstar, Ortiz (facing) was a successful high school and college wrestler in California. At Golden West College, he won the state JUCO wrestling title before attending Cal State-Bakersfield, where he would train with elite wrestler and now New England Patriots guard, Stephen Neal. Ortiz won the UFC light heavyweight title in 2002 and has earned victories over notable fighters, including Forest Griffin, at UFC 59.

Sean Sherk
A wrestler since he was 7, “The Muscle Shark” Sherk competed in nearly 400 matches. Nearly eight years since his first victory as a mixed martial artist, Sherk won the UFC lightweight title in 2006 and last successfully defended it against Hermes Franca at UFC 73. Sherk has compiled an MMA record of 37-3-1.

Mike Van Arsdale
A wrestler at Iowa State, Van Arsdale (red trunks) won the 1998 NCAA Division I Championship at 167 pounds. He was later inducted into the Iowa Wrestling Hall of Fame. As a professional mixed martial artist, Van Arsdale has an 8-5 record, including this win over John Marsh at UFC 52.